SofMedica is a member of an education-driven group of healthcare companies providing patients with innovative medical technologies and creating a bridge between the latest and most innovative medical technologies, patients and healthcare professionals. Dr. Konstantinos Konstantinidis was recognized for his 15 years of contribution in the field, his medical leadership, and large number of successful operations, and the educational guidance he has offered to his fellow surgeons and medical students at a national and international level.

Dr. Konstantinidis was the first surgeon in Greece and Southeast Europe to perform robotic surgery in 2006. At the invitation of Intuitive Surgical, he performed the world’s first single-incision robotic surgery, which was later followed by many more firsts in the field of robotic surgery.

After 15 years as a robotic surgeon, he has performed more than 3.5001 robotic-assisted procedures. Add to this another 16.500 laparoscopic surgeries and his experience in minimally invasive surgery exceeds the landmark of 20.000 operations.

In his 30-year career in Greece, the prominent robotic-assisted general surgeon at the Athens Medical Center has been a mentor for hundreds of Greek and foreign surgeons, who follow in his footsteps with their achievements in the hospitals of Europe and the US.

SofMedica awarded this important distinction to Dr. Konstantinidis in part due to a wide variety of surgical operations he has performed in the field of general surgery. In particular, his vast surgical experience covers a number of procedures performed in the esophagus, stomach, pancreas, small and large intestine, as well as bariatric surgery, hernia repairs, adrenal and spleen surgery.

At the same time, he is honored every year with many invitations by his colleagues around the globe, who ask for his supervision in their first robotic surgery attempts.

Dr. Konstantinos Konstantinidis said during the award ceremony: “I feel deeply moved by this distinction. It is a great honor for me, my team, the Athens Medical Group and our country to offer our patients in Athens an excellent surgical solution to their problems with the help of state-of-the-art aerospace technology. Our results and vast experience have put us at the forefront of the world with this important distinction. I would like to thank the President of the Athens Medical Group Dr. George Apostolopoulos, the CEO, Dr. Vassilis Apostolopoulos and the Vice-President, Mr. Christos Apostolopoulos for having equipped us with cutting-edge laparoscopic and robotic technology, which allows us to take the lead in developments and always be, not one, but many steps ahead. This distinction obliges me to continue at the same pace to offer my patients the best techniques for an excellent result. But above all, I am bound to continue to teach robotic surgery to all young surgeons from around the world. I expect that the use of 5G technology in combination with the robotic platform as distance learning tools will allow us to train surgeons who are not able to visit the Athens Medical Center.” 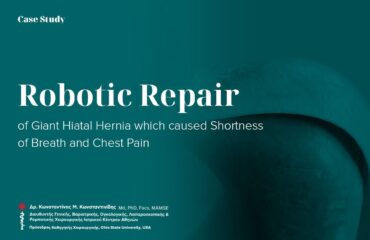